Posted on February 28, 2017 by cariadbooksblog 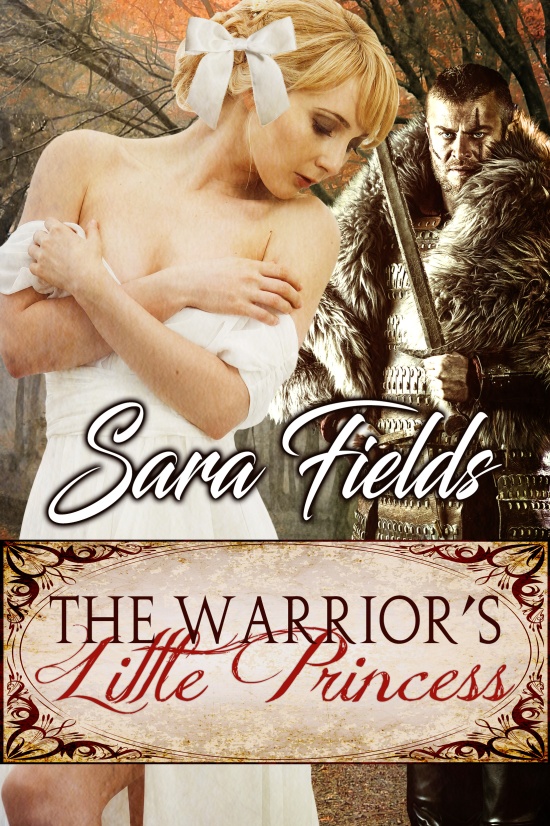 Irena cannot remember who she is, where she came from, or how she ended up alone in a dark forest wearing only a nightgown, but none of that matters as much as the fact that the vile creatures holding her captive seem intent on having her for dinner. Fate intervenes, however, when a mysterious, handsome warrior arrives in the nick of time to save her.

Darrius has always known that one day he would be forced by the power within him to claim a woman, and after he rescues the beautiful, innocent Irena he decides to make her his own. But the feisty girl will require more than just the protection Darrius can offer. She will need both his gentle, loving care and his firm hand applied to her bare bottom whenever she is naughty.

Irena soon finds herself quivering with desire as Darrius masters her virgin body completely, and she delights in her new life as his little girl. But Darrius is much more than an ordinary sellsword, and being his wife will mean belonging to him utterly, to be taken hard and often in even the most shameful of ways. When the truth of her own identity is revealed at last, will she still choose to remain by his side?

“Will it hurt?” With a heavy swallow, she suddenly felt a little scared. Try as she might, she couldn’t remember anything about magic or who this big man could be. She knew she should be terrified, but the longer his large hands held hers, the more comfortable she became.

“No, trust me, Irena. I won’t hurt you. Unless you have been lying to me, then I’m afraid that pretty little bottom of yours is going to spend some time over my knee.”

Nodding, she looked up into his eyes and lost herself in their depths. It was as though she was staring into a black hole, unable to sense the surface from the overwhelming intensity of the incredible darkness. A warm tingling spread across her skin and she felt herself relax even further. Guessing it was his magic, she savored the feeling of his power as it coursed through her, almost as though it was a massage. Despite the unknown, she knew she was safe in his hands.

She’d known the man for less than a day, but he’d already saved her from danger, given her a soft bed to sleep in, and hadn’t asked for anything more. He’d even let her spend the night alone. His large presence was extremely comforting, even if he had threatened to spank her. Frowning, she wondered what that would be like and was shocked to realize the thought excited her and made her body feel tingly all over. Gasping, she felt his magic finally pull away from her and she shivered, feeling a chill race across her skin without its warmth.

She blinked, staring back at him, realizing the darkness of his eyes no longer sucked her into its intensity. They were normal once again, black pupils surrounded by yellow irises. With a swallow, she sat there silently, waiting for him to speak.

“You can’t remember anything at all? Where you came from, your family, nothing?”

“I wasn’t lying.” She shook her head as her lower lip pouted out slightly.

“It’s like my memory has just gone blank all over and I don’t know why.”

“That must be pretty frustrating then, huh,” he said, his tone soft and understanding. He pushed an errant strand of blond hair out of her face and she smiled up at him. “We’ll have to have the healer examine you, make sure that you’re healthy and of sound mind. I suspect something else is going on in that little head of yours, something nefarious that even I cannot recognize yet.”

“I don’t need an exam. I’m perfectly fine. Just a few bruises from those stupid monsters is all.”

“Let me help you get dressed and then we’ll be on our way. The healer is not far from here.”

“Irena, this is for your own good. Don’t fight me on this.”

Narrowing her eyes, she scooted away from him on the bed. She wouldn’t take orders from him, nor did she want him to help dress her. That was ridiculous. She could put on her own clothes if she wanted to, not that she had anything but a nightgown to choose from. Plus, she wouldn’t stand for some stranger inspecting her for injury. It just felt strange.

No, she wouldn’t stand for it. Jutting out her chin, she crossed her arms and said, “I won’t go. Get away from me, you… you bossy bastard!”

He laid a hand on her bottom and she groaned, knowing what he was implying. With a heavy sigh, she hesitantly opened her legs, revealing the wetness she had hoped to hide from him. Her face flushed red hot as silence reigned over the room for a long, heavy moment. She suddenly felt the need to please him. Would he despise her for behaving so wantonly? Would he send her away after finding the wetness hidden within her folds?

She whimpered when his fingertips grazed up her thighs. His fingers glided across her pussy lips and she groaned with shame. She felt herself flush with embarrassment.

“My my, little one, it seems you were quite excited about your spanking,” he said, his voice laced with a chuckle.

“It’s so embarrassing. I don’t know why that’s happening. Please don’t give me another spanking, sir, I can’t make it stop,” she begged, dreading his response. She felt her pussy clench with nervousness.

“This pleases me very much, Irena. Don’t ever be ashamed of your body’s reactions with me,” he said sternly. “If you disobey me, I can promise you that this pretty bottom of yours will always be hot and red.”

“I feel like I can climb the walls. I don’t know what’s wrong with me.”

“Let me make you feel better, little one. Turn that beautiful body over so that you’re on your back and keep those legs nice and wide for me.”

Timidly, she did as she was told and rolled so that her bottom pressed into the bed beneath her. Despite the cooling cream he had rubbed into her skin, she still hissed at the feeling of her scalded skin grazing against the quilt underneath her.

He leaned back and looked her up and down with an appreciative smile.

“Irena, you’re so beautiful. Now relax and enjoy some good girl time.” She watched as he pressed his lips to the skin of her thighs and moaned at the sensations that raced through her body. Her pussy clenched as flames of desire roared within her. A bizarre need began to center deep in her core, growing with every moment his lips touched her, igniting every nerve in her limbs with an unquenchable passion.

Gently, his hands pressed below her thighs to cup underneath her hips, sliding her closer to him in one single movement. His kisses trailed further up her inner thighs, until he pressed his lips over the top of her folds.

“Oh, my goodness! You can’t mean to kiss me there!” she squeaked, having not anticipated what he was about to do.

He didn’t respond and instead, she watched as his tongue escaped his mouth, edging closer and closer to the secret place between her legs. It was almost in slow motion, as she felt the war whether she wanted him to continue or not come to a head within her. The instant the damp heat pressed against her vulnerable wet skin, she moaned as desire hit her like a tidal wave on a rocky beach and she decided she wanted it all.

“Well, no time like the present to teach naughty girls how to behave,” he said while he patted her bottom gently. She tensed under his words, suddenly growing increasingly uneasy with her current situation. Her nipples hardened into tight pebbles and she couldn’t help but whimper in response. She was naked over a man’s knee and he was about to spank her bare backside.

A loud clapping sound met her ears, echoing off the nearby walls once, then twice before she realized he’d smacked her backside. She yelped when the sting hit her a second later. His massive hand felt as though it covered an entire cheek, leaving no spot unpunished. He spanked her again and again, and before long, she was kicking and yelling out with dismay. It really hurt! Her bottom felt impossibly hot and sore, the steady cadence of his hand inescapable.

Disbelief clouded her mind. This couldn’t truly be happening. She couldn’t be naked over a man’s knee, getting her bare bottom spanked like a naughty little girl. Tears threatened to fall from the corners of her eyes as she squeezed them shut. She should hate the entire experience, but even she knew claiming that would be a lie.

Every time his big palm met the vulnerable flesh of her bottom cheeks, her body jolted with pain, but it quickly turned into something more pleasurable. Her cunny throbbed with need, already incredibly wet with liquid heat. She tried to press her legs together, hoping he wouldn’t notice the slickness between her thighs.

Her poor bottom felt like it was on fire. He was relentless, spanking all over her cheeks from the top to the lower curve of her backside. He even spanked the tops of her thighs, which caused her to whimper at the sudden overwhelming sting.

When he began to focus on that area, she couldn’t hold back her tears any longer. She held onto his ankle as tears cascaded down her face.

Finally, he stopped spanking her and quickly gathered her up in his arms. He held her close and she sniffed back her tears.

“That’s my good girl,” he whispered softly. His warm palm massaged up and down her back, which soothed her tears away. She whimpered slightly at the soreness in her bottom as it pressed against his thigh.

“That hurt,” she pouted.

“It’s supposed to, baby girl. You must let me take care of you, even if at times, it’s something new and scary. But don’t you worry, I’m going to make sure you’re safe and sound, no matter what happens. Until we figure out what’s going on with you, you’re going to have to trust me.”