Bearly Theirs (The Bears Of Greenspoint, #1) 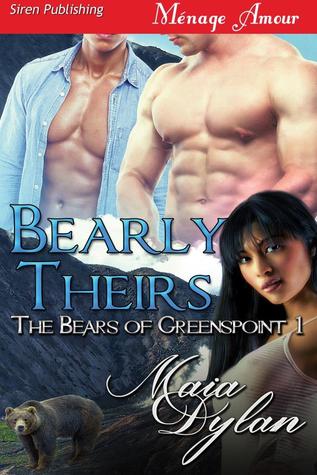 This is the first book in Maia Dylan exciting new series The Bears of Greenspoint and wow what a book this is you will find yourself immersed in too a world of awe wonder excitement and of course romance, which Maia Dylan pulls of o so wonderfully.

Keiko Saito is so having the worst day of her entire life but it so happens to be one of the best as well. See on the same day hat she learns that her brother has died she also finds out that she has to return to Japan, But on top of all that she discovers that the feelings she has secretly kept inside of her for almost two years to the very men who also happen too be her bosses… is returned…. she is overjoyed yet she knows she needs to return home to Japan.

Logan and Cooper Anderson have known from day one that Keiko was their mate. They had hired her initially for their business and had planned to woo her and steal her heart at the same time. Know their idea to take romancing her slow has gone straight down the drain when she learns of her brother’s death.

They are but together for one perfect intimate night of there dreams, when they allow their true feelings for one another to dictate their actions. When Logan and Cooper wake up the next morning, their mate is gone and no where to be found.

Will Cooper and Logan be able to find their mate in time to save her from the very future that she truly fears, or will they lose her before she can be theirs?

This book had me glued from the very first page I loved how different it was from Miss Dylan other books I also loved how we had two handsome as sin bears too love on… but that’s me being greedy reader lol. This book has everything and more packed in too it suspense the thrill of new love the loss of love as well as some steamy hot intimate scenes and some raw action packed fighting…… thrill of your book life and then some.

Keiko is awesome character she is a hard worker loves her job and well her bosses as well, she is shy and rather timid until tragedy strikes and she strikes while the iron is hot…. she goes for what she wants… even though she knows she has too say goodbye too the only men she has ever loved. Keiko is courageous and so strong.

Logan And Cooper are strong attractive men they are great bosses hard workers and get everything they need done and more… well except one thing there love for there mate Keiko they have been taking it slow… so slow that she doesn’t even realise that they are interested in her at all. Logan and Cooper both no that they will do anything for Keiko including going after her when she runs.

I loved all the characters and I found it super hard too pick a favourite I will admit I love Keiko mum such a strong lady, and I also loved the feisty old lady they take the guys too….. I forget her name now.

One of my favourite excerpts in the book I chose this one because it conveys over both Logan and Coopers need for there mate Keiko.

“Jesus Christ,” Logan groaned as their office manager scampered from their office and out to the elevators so fast she basically left skid marks on the carpet. “Did you smell that?” Logan turned to his brother and from the mask of barely controlled need etched on his face, it was clear that Cooper had caught it as well.

Cooper closed his eyes and inhaled deeply again. “You’re damn right I smelled that. Keiko saw something in the look you gave her that she definitely liked. Her breathing rate increased, I could see the pulse at the base of her neck start beating wildly, and the sweet, sweet musk of her arousal filled this office.” Eyes opening, he turned to look at Logan, and Logan could see his eyes flickering green to black, which spoke of how close he was to losing control to his bear. “Our mate is needy and not going to her and fulfilling that need is killing my bear.”

See what I mean raw emotions of need wants and the desire for there mate….. I love that excerpt.

ooo and watch out for the part where they kick bad guys behind…. its beyond amazing and written in such a way that you think you are there.

Maia Dylan is an utter Genius.

I cannot wait too see what and who are next in this series to fall in love.

5 Out Of 5 Hearts From Cariad Books