Posted on October 22, 2015 by cariadbooksblog 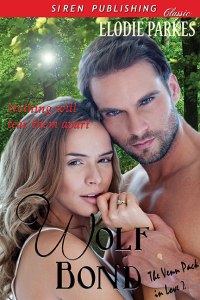 Liberty Venn longs for love after her alpha brother, Joshua, found it with Dani Cruz. It’s a year after the Cruz entrepreneurs have regenerated the town and saved Liberty from closing her cafe.

When a stranger arrives in town, he instantly captures lonely Liberty’s attention. Drawn to him by a deep undeniable instinct, Liberty loses her heart when Eden Farrell flirts with her.

Will he be the lover she’s begun to long for?

Eden Farrell, PI, wolf shifter, gorgeous, goes after what he wants, and now he wants Liberty. He recognizes the wolf in her long before she knows what he is. He ignites a passion in Liberty and she delights him with her response.

As a deep bond forms between them, danger follows Eden. He’s in love with Liberty, and believes nothing will keep him from her. Trouble is; danger is out to find them both.

“Eden pulled out a chair at an empty table by the window for Dani, but all the time he sought out Liberty with loving eyes. He soaked up the sight of her. She wore a yellow dress under her café apron. It dipped at the front, and although Eden noticed the guy she served had an eyeful of her pretty rounded breasts when she bent to place his food order before him, Eden could only sigh inwardly at how pretty she was. When she turned and walked back to the counter, he watched her shapely little ass accentuated by the dress as it rode up where the apron strings were tied.

Dani was speaking, but he had no idea what she’d said. He covered his inattention.

“Will I go to the counter and order coffee? Do you want anything else?”

“They do take your order here, but you can go to the counter, too. I only want coffee. No, wait. I’d love some apple pie. You should try it. They make it with our apples from the orchard.”

Eden wanted to go to the counter so that he could secretly talk to Liberty. Craig was over with a large group of people so if Eden hurried he could tell Liberty how good it was to see her. He practically shot out of the seat he’d taken and strode down the room to the counter.

Liberty looked into his eyes, and his heart that had only just stopped racing, sped up.

He gazed at her lips and then into her eyes. “Liberty…” Just saying her name gave him a hard-on. He leaned a little toward her, drawn by an urgent need to kiss her.

Liberty pushed her hands over the counter. “Eden, you’re with Dani. Does she know about us?”

He took Liberty’s hands in his, the move shielded by his body. The contact with her skin almost made him fall down. He’d noticed that before.

The first time he touched her after not being with her for a while made him weak with need. He whispered, “No, not yet. Let’s not tell her yet. Hell, it’s so good to see you. I can hardly wait for tonight. You look so pretty. I saw that guy you just served staring down your dress. I can’t even feel jealous because who can blame him? You’re a knockout. All the same, if he touches you, I might not let him leave the place alive.”