Thank you, Heidi, for having me on your blog today! I know you love my Eden series and hoping everyone else will, especially because Eden Revealed (Book #4) comes out this Friday! I also have a very special offer for your readers, so stay tuned.

I love a good angsty, dark dystopian story as much as the next person, but I discovered that I can’t write them. I have a lot of admiration for those authors who can. So, I have to stick to reading them. However, I have discovered I can write a Utopian story and really enjoy it. Actually, my Eden series is a Utopia with flaws, especially for women.

Ever since I read the French work, Candide in college, I have been fascinated by the “perfect society.” So, when I set about creating the planet Eden, I thought about what an ideal society might look like for a woman. I added the feel of an old civilization with a couple futuristic creations. Then I decided that all the men were hunks and they walked around naked. Like I said, Utopia 😉 I also created a social structure where women are put on pedestals since there are so few (none are born on the planet) and created a law that every woman must have a minimum of two husbands. Oh, did I mention these men cook, have muscles on muscles, and have special paranormal abilities? Those abilities come in handy for everyday duties, protection, and in the bedroom 😉

So, if you like the sound of Eden, I hope you’ll come visit!

To celebrate the release of this book I’m having lots of fun offering very special deals. First, the 1st book in the series Cruise into Eden is FREE for the entire month of May! Yay! Second, if you pre-order Eden Revealed and send your receipt to EdenRevealBonus@gmail.com you will receive bonus content BEFORE the story releases!

I’ve brought a brief excerpt with me. I hope you enjoy 🙂

A female spy, an Eden monk, and a man with no memory must reveal a corrupt leader while keeping their hearts safe—an impossible task.

Former stunt woman, Toni Reid, has adopted Eden as her new home. What’s not to like with naked hunks walking around and women being worshipped by them? She doesn’t mind the distraction of spying on one of the leaders of the Ruling Circle too much, but just as she discovers his secret, she’s caught.

Akasha is next in line to ascend to the Triad panel, those who determine which men are morally good enough to receive a portal chip. He has kept his connections to people

minimal keep his future judgements unbiased, but when he discovers Toni spying, he has no choice but to capture her and discover what she knows.

Sandale is busy recapturing who he was before his memory wipe. Travelling to Naralina to rescue Toni is a good excuse to meet his family and find himself again. He discovers Toni is more than a task, she is a force to be reckoned with, and his focus quickly shifts.

Akasha and Sandale find themselves embroiled in a plot that could well send Eden back into another world war over women. The only way to stop it is to work together with Toni, but working to stop a world war is easy when compared to laying siege to Toni’s heart.

Someone grabbed her arm. She instinctively balled her hand into a fist, but that one was caught too and twisted behind her back.

“Do not make a sound, understand?”

Sure, she understood. She understood she was going to relieve one Edenist of his balls the minute her arms were released. The man pulled her backwards, away from the peephole usually used for voyeurs and not for spies like herself. Yeah, she was toast if she didn’t get out of this.

Every ounce of her being wanted to fight against the hold on her, but she gritted her teeth and pretended to be meek. She’d never been meek. Her friend Serena always told her she turned aggressive when she was afraid and she “needed to keep her head”—whatever that meant.

She took a deep breath as they stopped while the man behind her kicked a door open. She wanted to see who it was so she could gauge her ability to talk herself out of this one…after she brought him to his knees. Not only didn’t she like being restrained, but aggression toward women was strictly forbidden on the entire planet. She doubted this Edenist would want to go before the Ruling Circle with Grandall in charge.

The man turned her toward the bed then pushed her away, slamming the door behind him.

She spun, her foot already headed for his groin as she glanced at his face. The air left her lungs in appreciation, even as his arm came down to knock her leg away from her intended target. As she turned, barely keeping her balance, her libido sighed in relief, but her ego wasn’t so happy.

She stopped her movement and stood facing him, her weight on the balls of her feet. She tried to keep her anger up as she stared at the tall man with the long dark hair,

light blue eyes, side-shaved head and the only tattoo she’d ever seen on Eden. This was her kind of male—just her luck.

Cruise into Eden (Eden Series #1) is FREE for the month of May! What had she been thinking to come on a nude cruise? 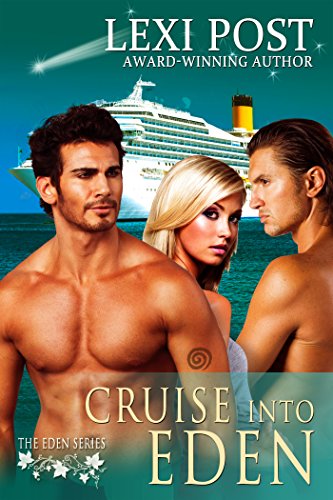 Sci-fi television employee, Erin Danielson, boards a nude cruise to get lucky, and boy does she ever because Nase and Ware have ripped bodies, enticing accents, and hearts of gold. In fact, they are out of this world…literally.

2 Responses to Eden Revealed And More