Posted on December 18, 2016 by cariadbooksblog

Born to a life of privilege, Winter Stevens is ripped from her entire world by a secret she’s not willing to give up. In a small run down cabin in the middle of nowhere, the past blasts back into her life in the form of the deliciously enticing, Jules Brennon, and threatens to reveal the secrets she’s protecting.

Jules spends his life in a solitary cabin in the woods, content with only his ax for company. When the long-vacant cabin nearby is rented out, he’s forced to endure a neighbor. Never in a million years did he expect it to be Winter.

A blustery cold night forces these two together causing secrets to be spilled, and Jules to get tangled up in Winter’s Storm. 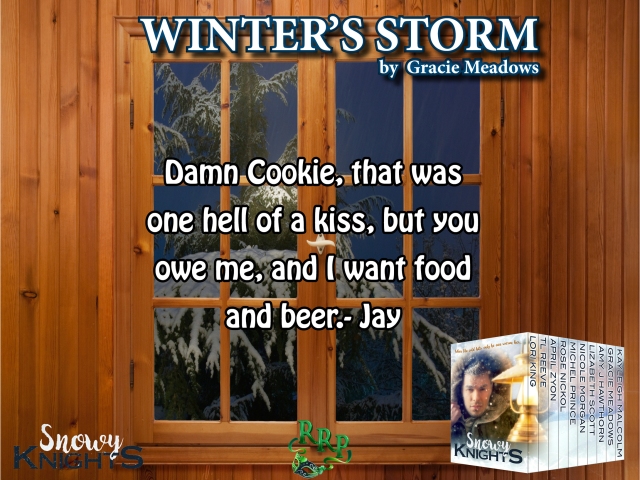 Jay pulled up to Aunt Opal’s cabin. It wasn’t so bad looking from the front, he knew better. The roof was shabby from the last big storm they had, and if he knew his Aunt, she hadn’t ordered more wood, which meant the sound coming from the back was someone trying to cut some more. Looking at the half a pile of old logs, he knew it wouldn’t be enough for the storm, let alone the winter. Good thing he brought some to help them until they could put an order in. However, if he could have his way, it would be telling them to high tail it back into town and stay there, it was safer, warmer, and he wouldn’t have to deal with them if the roof caved in with all the heavy snow floating down on top of it all.

Wood in hand, Jay walked around the back, stepping over the falling logs before watching a small woman raising an axe that looked to be ten years old, and dull as dirt splitter pieces of a small log sitting on the base. God, what was this woman thinking. One, she couldn’t cut wood with that thing. It would only get stuck, and too, she needed bigger pieces to cut up, and three, she was going to hurt herself holding an axe like that. Stupid damn movies made it look easy and that anyone could do it but just lifting and bringing it down. There was a right way to chop wood without hurting one’s self. No, they have men who don’t know the woods from a hole in their ass.

He watched as she did it over and over again, not making any real progress with the one single log she had been working on. At this point, it would have been easier just to burn the whole long instead.

However, something about her was vaguely familiar, he just couldn’t put his finger on it. He stood still to see what she would do next, but when she brought the axe down again, he couldn’t stop the landing. Her hands were placed all wrong, and as the axe made contact, she yelled out in pain. Dropping the wood in his hand, he ran over to her.

“You okay?” As he got closer, she turned to look at him. Those eyes. Bright green eyes pierced through him, freezing him in place.

Her face went pale, she held her hand as a piece of wood stuck out of it. The axe was old, which meant the handle was too. It had a crack and when it made contact it went up and into her hand. Sadly, he learned that mistake himself a long time ago.

“Jay? What are you doing here?” Her voice shook, and he didn’t know if it was a shock, pain, or something else that made her look like she was going to be sick.

“Aunt Opal sent me to check on her latest victim. I take it you’re staying here?” He glared at her, unable to hide his disdain for the woman who haunted his dreams and played him like a chump.

“Aunt? Shit. I didn’t know. Hell, Jay, I didn’t even know your last name until that meeting. Look, I gotta go get this out. Can I call you or something later? I needed to get inside.” She dodges him, trying to head straight into the cabin, he wasn’t going to have any of it until he looked inside and make sure the roof and the fireplace are okay to stay in. The last thing he needed was her banging on his door because she was cold or broke a nail.

She practically ran to the door and shut it behind him. He turned the handle and instantly, she froze, blocking his way in.

“Look, I’m good okay. I just gotta get better at chopping wood. Thanks for stopping by.”

“Let me see inside, and take a look at your hand.” The piece of wood was still lodged inside, and she was doing her best not to make it such a big deal.

“I, umm, you see. I can’t. I got, well…” but she didn’t stop him as he pushed his way inside and he froze just looking around the place. It was clean if not slightly cluttered with… toys. Spinning around he looked at her confused. When was the last time toys had been in this house? 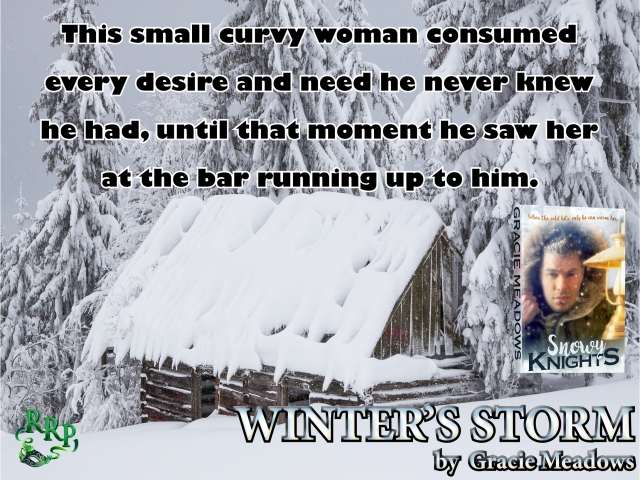