Posted on December 14, 2016 by cariadbooksblog

In premier novel, The Barbarian’s Captive, we meet the Primarians, giant, heart stoppingly handsome men from the male dominated planet, Primaria. Tragedy has caused their female population to dwindle and has lead them to seek out other species to save them from extinction. Max Kerr, their Princep, finds his fated mate and Prima in Earth scientist, Lieutenant Eva La Croix. Sparks fly as they find they have an unquenchable desire for one another as well as a rare and unbreakable bond that can never be severed.

In His By Command, we board the Odyssey and follow Captain Maggie and her crew as they attempt to escape their Primarian pursuers. Danger, intrigue, and desire are the order of the day as Maggie determinedly fights to escape so they may continue their mission to save the people of Earth. Passions flame and cheeks get heated as Maggie repeatedly defies and refuses to surrender to Roth, the gorgeous, irresistible, and dominant to the bone Commander of the Primarian Space Fleet.

A sharp crack preceded a swath of stinging fire across her backside. She jerked forward, sending the buzzing vibe firmly against her clit and up inside her wet passage. While trying to ease away because it was too much, another lash landed. This spurred her forward again as she emitted a groan of both pleasure and pain, and she couldn’t tell which one she needed to stop more.

And so, it continued, in a give and take motion. Sizzling pleasure-infused pain as the strap fell in another unrelenting stroke, and scorching pain-filled pleasure as the unrelenting sensation on her pussy made her ready to explode.

She almost did on the fourth stroke, calling out his name as she canted her hips, seeking more and less at the same time. As the fifth landed across both cheeks simultaneously, her reality shattered and she came apart.

“Helper…angle forward,” he growled as he dropped the strap and moved in behind her. Frenzied fingers removed the vibrating rod an instant before he drove up inside her. His possession of her still-clenching, convulsing sheath sent her from one orgasm directly into another.

She felt everything, his lips on her spine, his hands curling around her hips, her breasts bouncing with every thrust of his cock. He built it once more as he drove into her. The third blissful release was upon her when his fingers flexed upon her skin and he pumped deep—once, twice, and a final time—before he tensed behind her and shouted his own completion.

Mindless and exquisitely numb, she hung there, what else could she do? —feeling his weight along her back.

His mouth moved before the rest of him did. “Neutral position.”

With a few whirrs and pops, she was standing upright and a little light-headed as he undid her wrists and thighs, and released the strap at her waist. Her legs were like jelly and if not for the support of his strong arms, would have slithered to the floor. He lifted her with an arm beneath her knees and curled along her upper back, cradling her as he carried her to the big bed. Once he’d settled her under the soft bedding, he followed her in. 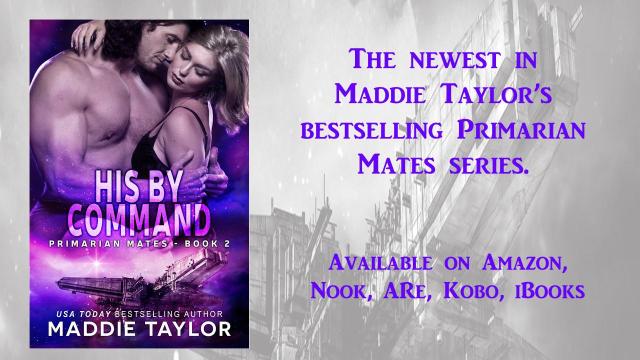 Leading an all-female crew on a deep space expedition weighs heavily on Maggie Vohlmer’s young shoulders. Their mission, find a habitable planet to replace the dying Earth. With the Odyssey in orbit around a promising new world, a team of their best scientists is attacked while exploring the surface below. Maggie can only listen helplessly to their distress call as a solar storm prevents a rescue. In the aftermath, she is left with an impossible decision, pursue the powerful aliens who have taken eight of her own, or leave them to their fate while protecting the hundreds of women still under her command.

When their ship is seized by the same enemy days later, they are surprised to find their captors are gorgeous, human-like men. They are also huge, stronger, and much more advanced. Maggie can only hope they aren’t the barbarians they first thought and can be reasoned with. Those hopes are dashed when they are whisked away to the aliens’ world to become mates to these dominant men. They are shocked further to learn that on Primaria, men make the rules, women are expected to obey, and defiance will be met as it has for generations, with a bare bottom spanking. Reeling as their world, and mission, is turned on end, Maggie and her crew can think of nothing except escape.

As leader of the Primarian Space Fleet, Commander Roth is dedicated to protecting his people from otherworldly threats, as well as searching out a compatible species that will help save his dwindling race. With so much at stake, he doesn’t have time for a mate. But destiny has other plans for him, sending him the perfect match in the form of the curvy, blonde captain.

Except Maggie is unwilling to give up the fight for their freedom, not while her mission to save the people of Earth is unfulfilled. She refuses to submit willingly, and Roth will not bend. Both struggle to deny the passionate chemistry that flares hotly between them. When in a twist of fate, they are paired together, can these two determined leaders find a way to coexist? Or will Roth’s resolve that she bow to his authority, and his old-fashioned brand of discipline, lead to heartache? And, in the end, can Maggie, who tries Roth’s patience at every turn, find a way to rescue both worlds, while learning to acquiesce to the dominance of her unexpected mate?

1 Response to His By Command