Posted on September 15, 2016 by cariadbooksblog 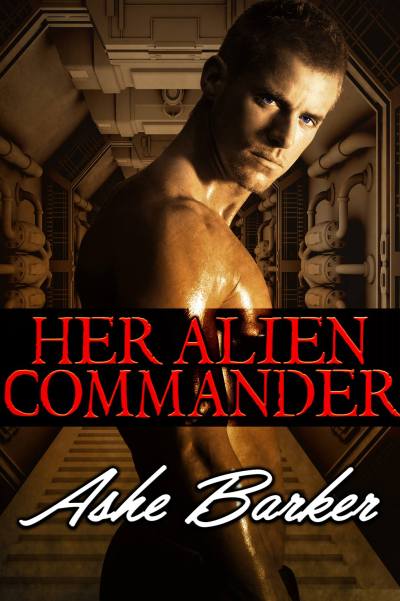 After leaving Earth on what she thought would be an adventure, Caria Montgomery quickly ends up in way over her head. Captured by hostile aliens, she faces the prospect of perishing on an isolated planet until she is rescued by Commander Phahlen Verdar and his crew.

Phahlen is delighted to have a human female aboard his ship. In the years since the women of his own world were nearly wiped out by a terrible plague, taking a mate has become all but impossible for most males of his species, and he doesn’t plan to let this opportunity pass him by. His plan to claim Caria is aided by the fact that, due to the unsavoury nature of the crew of the ship on which she was travelling, she is now a wanted fugitive back on Earth.

Though Caria is initially defiant, a sound spanking on her bare bottom demonstrates her admittedly handsome future mate’s resolve. His bold dominance awakens an intense need within her, and before long she finds herself yearning for the pleasure of his masterful lovemaking. But is she truly prepared to surrender herself fully to her alien commander, or will she seek to return to Earth and clear her name as soon as possible?

Publisher’s Note: Her Alien Commander includes spankings and sexual scenes. If such material offends you, please don’t buy this book.

Well I’ve never joined a crew of space pirates and raided inter-stellar craft, but I might if the opportunity arose. I suppose Caria is something of an adventurer, and I’m a bit like that too. She tends to jump in with both feet, then worry about the consequences later. In Her Alien Commander she is often impetuous, but she has a streak of bloody-minded determination too, which I admire. The odds might be stacked against her, but she doesn’t give up.

Well, I think you just about covered the basics there. Phahlen has a strong sense of duty, and of justice, though Caria may not think so, at least not at first. He knows what he wants from her, but he takes care of her too. He saves her life at the start of the book, and it’s Phahlen who finds a solution to the problem of her criminal past. He’s always there when she needs him, though it takes her a while to appreciate his finer qualities.

Because I love the idea of playing God. I can create just the world(s) I want, set up whatever social system suits my story, and craft the most amazing characters. The usual laws of physics, time, and cultural behavior don’t count so the story-telling can be much more creative and inventive in an alternative universe. Stories which might be really controversial if written as a contemporary romance can be ‘cloaked’ in a sci-fi.

I’d tell them to have a go, but to have a decent thesaurus to hand. And an internet connection. Youtube is the erotica writer’s friend.

Yes. I try to be fairly ordered about it. I like to be at my desk (well, more accurately the kitchen table) laptop fired up and coffee to hand, by nine in the morning and I tend to write for most of the day then. There are also a lot of related tasks to keep on top of, mainly to do with promo or research, or keeping in touch with readers and other authors. It’s definitely a full-time job for me.

I think it was always there, though I only started writing properly about three years ago. I have always tended to plot stories in my head though, often when sitting in traffic jams on my daily commute. I now work at home so all that time spent inhaling exhaust fumes is finally paying off.

I was given lots of advice as a teenager, much of it unsolicited and not especially good. I think we all have to make our own mistakes, but hopefully I haven’t made the same mistake to many times. That would be sad.

Looking back, I think the most important thing I picked up along the way was that we all have choices, all the time. We’re entitled to choose our own way in life, but we should also be ready to own and accept the consequences of our decisions.

Someone once invited me to cast my mind forward to a time perhaps sixty years from now when I’ll be long-gone and my daughter (currently eighteen) is herself entering old age. Imagine she’s talking to her grandchildren, telling them about me. What would I like her to be saying? My actions now, today, will dictate what those obituaries might be so don’t leave it until later to be the sort of person you want to be remembered as.

Turn out the lights.

I think at some level or other they are all a little bit about me. I could never write a book about a heroine I didn’t actually like or identify with in some way. Maybe I’d call my autobiography Made a Difference, because I hope that would be true. Perhaps that should be on my gravestone rather than a book cover, come the day.

I adore Love Actually and I can’t count how many times I’ve seen that movie. It has lots of love stories all rolled up and woven into each other, but I think perhaps my favourite is the one featuring Hugh Grant.

I also remember reading Katherine by Anya Seton many years ago, and I’ve never forgotten the magic that shimmers between Katherine and her hero, John of Gaunt. Their lifetime love affair is set against the dramatic backdrop of medieval England, a period I also like to write about.

Read Chapter One for free

. “Have you heard of the Oestral Pandemic?”

Caria shook her head, forcing her concentration back to the matter at hand and her somewhat unpredictable situation.

“It’s a disease, a viral infection to be exact, virulent and highly contagious. It swept through Vahle some twenty-seven years ago and halved our population within a matter of three par-cycles. We were able to develop a vaccine, but not quickly enough to prevent the spread of the disease. By the time we were in a position to control it, the damage was done.”

“Half your population, you said?” Caria gaped at him. She could barely comprehend such a tragedy.

“Yes. The female half. The Oestral virus only affects females, and it proved fatal in ninety percent of cases. Those Vahlean females who did survive were rendered infertile by the virus. We became a race of males and a handful of sickly females, doomed to become extinct unless we could find some way of producing a next generation, and over time re-establishing a gender balance. So you see, as a healthy female you are of great value to us and we will reject demands for your extradition in order to secure your… contribution… to our efforts.”

“No, but humans are among the half dozen or so compatible species who can be impregnated by Vahlean males to produce young who are themselves fertile. Your offspring will be half human, but we are prepared to accept the dilution of our species if that is the cost of survival. We are a pragmatic race, Caria, and a determined one. When we learned that a human female remained trapped on the planet, it became imperative that we extract you alive. That is the only reason you are here.”

“So, if I had been of no value to you, you would have left me to die?”

Phahlen had the grace to shrug, his expression decidedly uncomfortable. He hesitated, clearly reluctant to answer.

“Wouldn’t you?” Caria was not about to allow him to evade her perfectly fair question.

“Yes, probably,” he bit out at last. “The situation on planetoid three seven nine was perilous in the extreme. If you had been a male, or even a female past her fertile years, I doubt I would have risked my life and the safety of my crew in affecting a rescue. And now…”

“Now you will have your payback.”

“In a manner of speaking. I have been in contact with the Vahlean High Council and registered my claim. Confirmation was received just a few moments ago, and you are now fully under my jurisdiction and protection. The authorities on your planet have accepted this ruling in exchange for our guarantee that there will be no repetition of your earlier transgressions and that you will be held in a secure unit for an appropriate length of time. The suggested sentence for piracy is thirty of your Earth years, I am advised. Needless to say, you will cause no further trouble to Earth or other allied civilisations, and I have no doubt we can provide the required level of security to satisfy the conditions imposed by your home world.” He paused, as though waiting for her to concur with his view of the matter. Caria remained silent. She was stunned.

Phahlen lifted one eyebrow, then continued. “You are no longer Caria, of the Montgomery line. From now on, and for the foreseeable future, you will be designated as convict three seven zero, Delta class. I regret that no appeal will be permitted, and that I can offer you no choice in the exact nature of your confinement and the treatment you will receive whilst in my custody. The stakes for Vahle are far too high for that. You are, to all intents and purposes, mine now. You will make yourself available to me, and your children will be part of our repopulation project.”

He paused to cast a swift smile her way. Caria believed he intended to offer reassurance. He failed utterly.

“However,” he continued, “as I assured you earlier, this need not be an unduly unpleasant existence. I am prepared to treat you fairly, with respect and consideration, and of course your good health will be my paramount concern.”

“Because I am breeding stock? No better than a brood mare?” Caria managed to grind out the words, her lips dry, her throat already closing as she struggled to catch her breath.

He chose not to reply, but she couldn’t mistake the incline of his head.

“How is it that you get to stake your claim to me? The privileges of rank?”

“In part, yes. However, given our need to optimise the outcomes of the Vahlean repopulation programme, we also vet all males to grade their fertility. It would be foolish indeed to allocate one of the few females we do have to a male who may fail to produce the goods. My grading is alpha ten, the highest fertility ratio in the Vahlean spectrum, so I have priority status in such circumstances. I am at the head of the line, so to speak.”