Posted on August 30, 2016 by cariadbooksblog 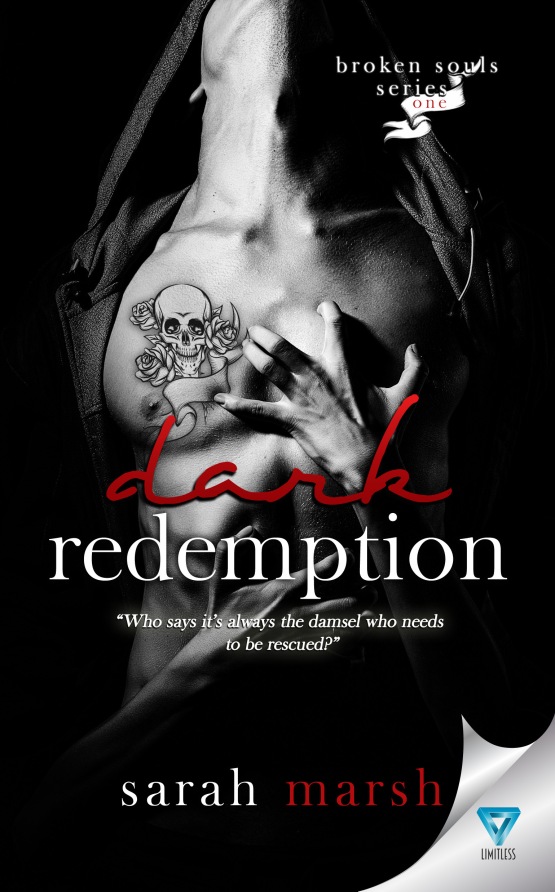 Sofia Boon was ready to make changes in her life, but she didn’t see this coming…Taking a chance, she finds the nerve to ask out her handsome neighbour, but when he doesn’t show up for their date, Sofia knocks on his door and meets a man claiming to be his roommate, and she soon realises she’s made a horrible mistake.

Eitan Kent is a tortured man, haunted by a death he was unable to prevent…

Eitan believes he is unworthy of being loved. He buries himself in his work and takes a job to track down a wanted criminal, Ben Donovan. He locates Donovan’s apartment but finds it empty—until Donovan’s “date” shows up.

Eitan doesn’t know what to make of sweet, curvy Sofia, but she’s the only lead he has…

Feeling he has no choice, Eitan decides to take her with him to see if she can somehow lead him to Donovan before it’s too late—or if her innocence is all an act and she’s involved in the bastard’s crimes.

Sofia is terrified and tries to explain to the dark stranger that she barely knows her neighbour and has no idea how to track him down, but Eitan knows exactly how to get the truth from her. Who knew a little torture could be so sweet? 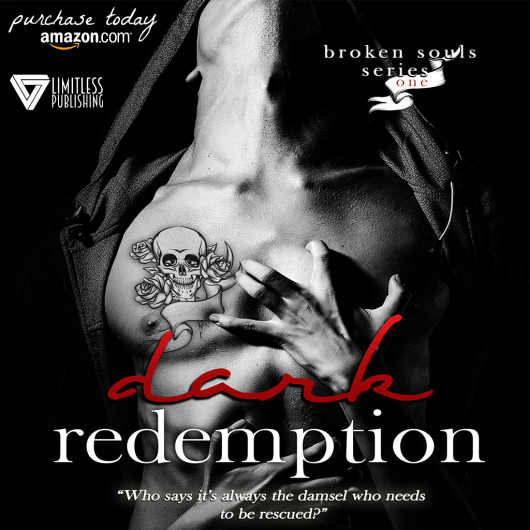 That rat bastard! She thought as she watched him stroll out of the room just as though nothing had happened. As if he hadn’t just gotten her so turned on that she thought she’d spontaneously combust and then just…left.

Sofia didn’t think about what she would have done if he’d tried to have sex with her. That would just ruin the fury she was currently riding. She should be relieved he hadn’t tried to force her. She should have been, logically speaking, but she had to admit to herself her overheated body was ready to beg for release and that her traitorous hormones were killing the rational part of her brain. Sofia knew it was crazy, but all she could think about right now was that the most satisfying way to get some relief was under her sexy captor. It was an issue that only got worse as he walked back into the room with a tray of food and all that beautiful, tanned bare skin.

“Here, let me help you sit up so you can eat,” he said, putting the tray down on the nightstand and moving closer, “Or would you rather wash up and use the bathroom first?”

“Bathroom first, please,” she said immediately, thinking she could follow his lead and get some satisfaction while cleaning up.

But clearly, her eagerness must have given her away because he raised one eyebrow in challenge.

“Okay, but you have ten minutes to shower, and you are not allowed to touch yourself other than to get clean―am I understood?” he said in a firm tone as he leaned forward and undid her wrists.

“You’re going to watch me?” she asked, not quite certain if she was offended or turned on at the prospect. She wondered for a second why his firm tone seemed to excite her more than it should have.

“Do you want me to watch you?” he whispered low next to her ear, causing awareness to spread through her entire body.

Sofia was a little breathless at the thought of putting on the same show for him as he did for her, but in the end, her pride won out over the wanton need she felt inside.

“No,” she barely answered, and it sounded weak even to her ears.

His deep chuckle at her answer made her nipples peak even more, and she was almost disappointed when he leaned back and pushed the timer on his watch.

“You’ve got ten minutes, Sofia. Then I come in and get you.”

Sofia had never used the washroom and showered so fast in all her life, she got done with barely a minute to spare as she put her bra and underwear back on and then wrapped herself in a big fluffy towel before she walked back out into the room.

“You can keep the towel until you’ve eaten, then it’s off,” he said once he saw her.

She’d take that small win, and she took her sweet ass time eating as well until he finally took the tray away after she’d spent five minutes chewing a single piece of melon.

She thought about it, but there was nothing she could do against his superior strength, so she begrudgingly laid back against the padded headboard and raised her wrists.

“Why are you doing this?” she asked quietly. “I told you everything I know already.”

“Well, I’ll see about that soon enough, won’t I?” was all he said in reply as he fastened the cuffs and picked up the tray before he left the room.

By the time Eitan had gotten the kitchen cleaned up from breakfast and returned to the bedroom, he was already half hard from replaying how she’d looked watching him come in the shower. He thought about putting on a pair of jeans, but why bother? He certainly wasn’t ashamed for her to see how she affected him and she sure as hell didn’t seem to be put off by his body, so he may as well use that to his advantage, right?

“Ready for the ankle cuffs?” he asked as he entered the room.

He saw her swallow hard and move her legs tighter together.

“Why do you have to?” she asked with a worried look. “Are you going to touch me?”

“You don’t want me to touch you?” he challenged, already knowing her body didn’t have any arguments.

“Of course I don’t want you to touch me!” she answered, clearly trying to sound offended that he’d suggest such a thing, “I don’t even know your name!”

“Well, that’s easy enough to remedy,” he said as he placed one knee on the bed and pulled up the first ankle cuff. “My name is Eitan. Now give me your leg, Sofia.”

He could tell she was surprised he’d given her his name, and to be truthful, he was a bit surprised by that himself. But the more he thought about his name on her lips as she moaned her pleasure, the harder his cock got. He was doing all sorts of things with this little captive that seemed to be breaking his rules, and Eitan wasn’t sure he really cared.

When she tentatively placed her little foot in his hand, he quickly attached the cuff and then slowly ran his fingers over the softness of her skin. Clearly, she waxed her legs as the skin was still supple and hair free. That thought made him more aware of the noticeably smooth skin under those pretty purple panties, and his mouth watered as he imagined how soft it would feel under his tongue. As he fastened the second cuff and her legs moved further apart, it was all he could do not to crawl up her body and relieve her of those panties just as he’d fantasised about doing in the shower this morning. It was then that he finally had to admit to himself that this interrogation was probably going to be more difficult for him than it was going to be for her…because his self-control was already bucking to be let loose. 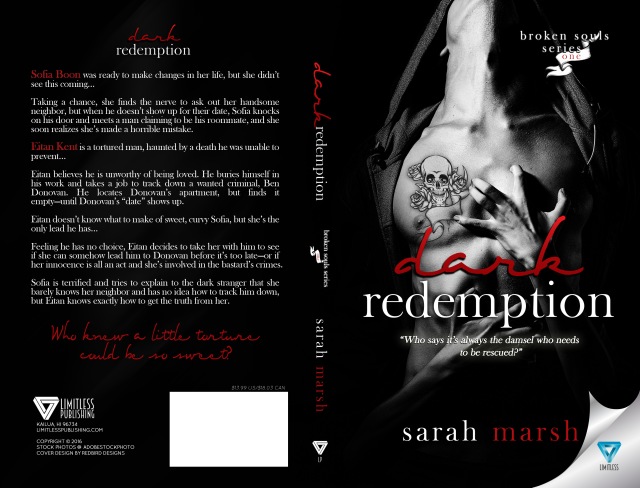 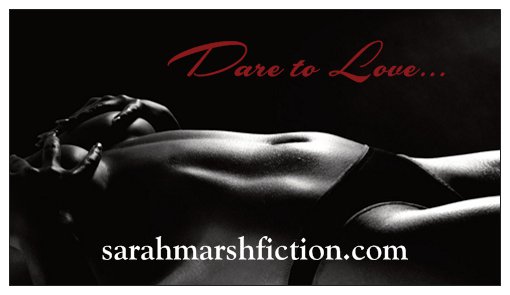 ABOUT THE AUTHOR — Sarah Marsh

Sarah Marsh was born in British Columbia where she still lives, she has only recently began her writing career finding it the perfect outlet for taking the edge off a nine to five office job. She’s been a science fiction and romance junkie for years and when her imagination started to take the characters she’d read about even further in their adventures she decided to try writing something of her own.

Sarah’s also a former pastry chef and spends a lot of time cooking and baking for friends and family as well as painting and knitting. Her biggest weaknesses are animals of any kind…she even loves the ones that wake you up at four in the morning because they can almost see the bottom of their food dish.

When it comes to life in general she’s a big believer that laughter is the best medicine and that there’s no such thing as too much love, which is why she’s such a sucker for a happy ending. 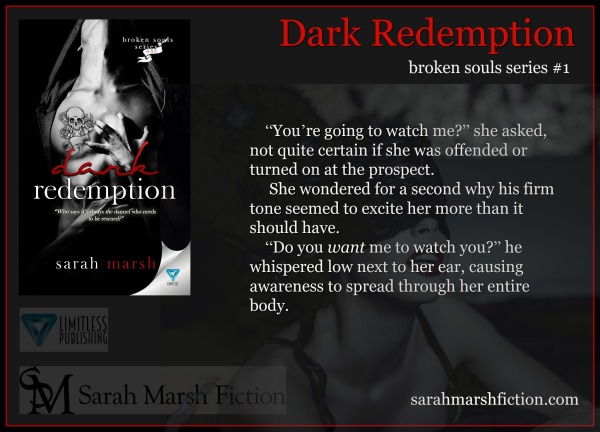