Out of Order by Bella Juarez

Surrender Her Inhibitions by Nicole Morgan

Under His Protection by Doris O’Connor

The Sub That Got Away by Amy J. Hawthorn

In His Hands by Raven McAllan

Submitting To Temptation by Jan Graham

Fire and Ice (An Excerpt from KNOTTED) by Juliet Braddock

Blurb for Submitting to Temptation by Jan Graham

Accepting a position at her brother’s law firm seemed like a great way for Susan to get back on her feet after a nasty divorce. That was until she met junior partner, Blake Daniels, a man who personifies everything Susan ran away from when she left the BDSM scene years ago—Dominance. Blake is a patient man, and it’s a good thing he is because waiting for Susan Dean is driving him to distraction. Susan is a submissive, he’s sure of it, but getting her to admit that fact is harder than he envisioned. When Blake decides it’s time to make his move, Susan has no option but to admit her true nature and submit to his tempting ways.

Enjoy this excerpt of Submitting to Temptation by Jan Graham 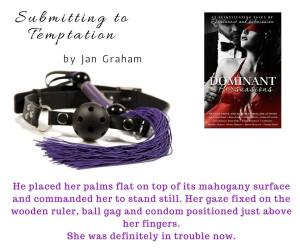 As Susan rummaged through her purse, presumably looking for her house keys, he exited the car and walked around to open the passenger door. As he escorted her to the entry of her flat, located at the side of the Dean’s home, he resisted the urge to lower his hand from the small of her back onto her lushly rounded ass. She was definitely a woman who had a bottom designed for spanking and one fleshy enough to mark nicely with a few strikes of his cane.

“Thank you for driving me home.” Susan spoke nervously as she fumbled to get the key into the lock. “I’m fine to take it from here.”

Blake stood close behind her, intentionally crowding her toward the door. He reached his hand over her shoulder and placed it over hers, assisting her trembling hand to successfully slide the key into the lock. He then tightened his grip on her fingers, preventing her from turning the key. She braced her free hand on the frame of the door as he wrapped his arm around her waist and held her firmly against his body.

“Are you sure you wouldn’t like me to tuck you into bed and kiss you goodnight, Susan?” He whispered the words into her ear and felt a shudder run through her body as he exhaled a slow stream of warm breath to caress her neck.

“I know, I heard you tell Justin at the club. You’re not ready.” Blake ran his hand upward over her midriff before cupping her breast. He felt the tightened bud of her nipple through the fabric, and pressed it into his palm as he gently squeezed her flesh.

Her breathy moan encouraged him, as did her head falling back to rest on his shoulder, and her bottom pressing onto the erection beneath his trousers as she arched against him. He removed his hand from over hers and swiftly positioned it to cup her mound, pressing her skirt between her legs and pulling her harder against the stiffness between his legs. He pinched the peaked nipple beneath her clothing as she began to squirm against the hand between her legs.

“Blake, why are you…” the low moan that rose from within her caused his cock to flinch with demand. He’d made his point.

He moved both hands to rest firmly on her hips.

“I want you to remember who I am, Susan.” He ensured the tone of his voice was firm because he wanted her to know that he expected her to comply with his demand. “When you’re ready, I expect you to come for me, do you understand?” 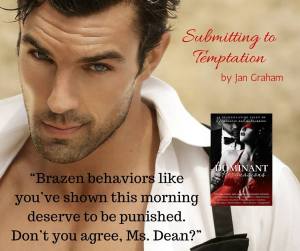 “Yes.” Her breathless reply caused him to smile. As did the fact that she stood with her hands still braced against the door.

“That’s my good girl.” The sharp slap he placed on her ass as he prepared to walk away, caused her to squeal and spin around. The arousal in her eyes spoke an undeniable truth. “Yes, you like that don’t you?”

Blurb from Broken by Julia Sykes

But everything changes when sexy Dom Damien shows up at Dark Grove and locks his sights on her. He senses her submissive nature and is intrigued when she rebuffs his advances. Determined to take on the challenge, Damien resolves that Gwen will submit to him, no matter what it takes.

Can she resist the unbending Dom who is determined to help her heal? Or will she remain broken?

Enjoy this excerpt from Broken by Julia Sykes 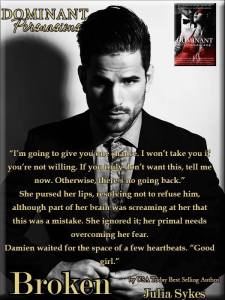 She yelped in surprise, and the barstool she was holding clattered loudly to the floor.

No. Surely this wasn’t happening. He couldn’t be here. Taking a deep breath, she turned slowly. Her stomach dropped. Sure enough, there he was, striding across the bar, exuding that dominant aura that so disconcerted her. His masculine scent infused the air around her, tangling her thoughts.

“What…” she began shakily. “What are you doing here, Damien? We’re closed.”

“Gerald told me it’s okay for me to stay late and talk to you,” he countered smoothly.

He entered her personal space, and she tried to back away from him. But her lower back hit the bar behind her, blocking her escape. His strong arms braced on the polished wood on either side of her, hemming her in. She swallowed hard as she looked up into his black eyes, his expression unreadable.

“You can’t run this time,” he said softly. “I know you want me. You can sense this connection between us. Why are you denying it?”

Gwen didn’t respond. Her heart leapt into her throat, choking off her words. She didn’t have any to give him, anyway. She couldn’t do this, couldn’t let him in. If she did, he would surely rip another hole in her ravaged heart.

“Answer me,” he half-growled, his tone threatening. He seemed to grow impossibly taller, towering over her.

She quivered under his hard gaze, trembling in fear. Or was it a pleasurable shiver? She couldn’t deny his effect on her, the way his demanding nature threated to overwhelm her, to break her. And a part of her wanted that, wanted the release from the constant strain of concealing her needs. But she managed to shake her head weakly, refusing to open up to him and make herself vulnerable.

He leaned into her slowly, until his lips were at her ear. “You will yield to me, Gwen. I won’t allow you to run from me any longer. I know what you desire, even if you won’t admit it to yourself. You want to submit to me.”

Despite herself, Gwen couldn’t stifle a small groan at his words. Her panties were wet, her sex pulsing.

“I’m going to give you one chance,” he continued softly. “I won’t take you if you’re not willing. If you truly don’t want this, tell me now. Otherwise, there’s no going back.”

Oh, god. He was going to fuck her. Right here. What would he do to her? Did she want that?

More than anything. Surely it couldn’t hurt to give in just this once…?

She pursed her lips, resolving not to refuse him, although part of her brain was screaming at her that this was a mistake. She ignored it; her primal needs overcoming her fear.

Damien waited for the space of a few heartbeats. “Good girl.”