Posted on December 19, 2015 by cariadbooksblog 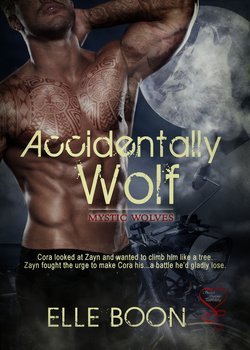 I cant believe I waited so long to read Mystic Wolves series….. sighs and hangs my head it’s so amazing Elle Boon is a superb writer and she knocks it out of the park every single time I love her so hard.

This is the First book in Mystic Wolves series and in this book we meet Cora And Zayn There lives may have been just ordinary for them before but its sure going to be out of this world know they have met each other.

Cora Welch is just an ordinary veterinarian going about doing the work that she loves. Cora is out Running when she she gets caught up in a bit of excitement when she discovers a small wolf with his paw stuck in a dangerous trap. She just knows that she will save this little guy, so she takes the wolf home with her and begins the task of cleaning up his paw and hopefully saving him.

But she is in for a surprise and a half when she gets out of the shower in nothing other than a tiny towel and she runs right into the most stunning buck naked man…and some how he is in her apartment. What’s a girl to do other than pass the heck out …. mind you me being a bit naughty I would have been looking at some other mmm interesting parts rather than passing out.

Zayn well he is the brother to the alpha of the Mystic Wolves pack. He knows beyond any doubt that he will save his nephew because he has too especially after everything that his brother has been through tragically loosing his his mate there will be no way that he will let him lose his precious son.

They soon find out that feisty Cora has been accidentally bitten by the little wolf that she saved and he had started the process of turning her into what they are….. Wolfs.

Will Zayn be able too control himself? Or will His Mark be exactly what she needs?

Omg I Flove this book so much I devoured this book in like an hour it held me every step of the way I was so routing for Cora man she is one lucky lady and yes I am Jealous …….mmmm maybe envious as well Miss Elle is a magical writer everything is just so amazing from the story line to the characters and the raw passions that smokes up our screens.

Cora is such a spunky kick butt character she has it all and such a generous caring soul and she loves purple …. 😉 which has too be a plus. Cora is one of those characters you wish was real and that you could be friends with her she just radiates warmness. I loved her reaction when she first meets Zayn he brings her such a spark a rush of emotions and utter lust the way she looks at him is like he is a yummy popsicle she wants to lick up….. can you blame her seriously.

Zayn well he is rather arrogant cocky he opens his mouth before he thinks of what he is saying and some times it is fatal. He is loyal to the core as well as being a family man. He has seen what his brother Niall has gone through and he is certain that he is not ready for a mate let alone a human one …. yes she may have been accidentally bitten but should he shouldn’t he ….. is she really his mate?

Will he be able to open his eyes as well as his heart to see what fate has brought him?

My favourite part of this book has to be when they explain to Cora that she is becoming a wolf just like them, I cant help thinking what a rush a thrill and how scared she must have felt hearing those words, The way this scene is written just touches my heart like seriously hard.

This book will take you on a roller coaster of emotions of all the best kind, I cannot say in words how much I adore this book. Everyone needs to read it and fall in love with Miss Boon just like I am.

Miss Boon owns a part of my soul she is the Mistress of Paranormal Romance.