Posted on October 11, 2015 by cariadbooksblog

Today we have Three incredible authors taking over my Blog I want to say a huge thank you to them all. Third up we have Maia Dylan. PS Dont forget to comment as you will be entered in to a give away too win something of Maia .

Lets start of with a naughty question to get all our hearts pumping have you ever been with the opposite sex? And if yes have you used it as inspiration in your book?

When I was at University one of my closest friends and I French kissed a couple of times. Just to get a ‘rise’ out of guys, if you know what I mean ;-). We are still very close friends today and our husbands are still wanting us to reenact those days for them.

Tell us more about you and what drew you to your genre?

What kind of sex scene is the hardest of all for you to write?

Can you share a naughty snippet from your latest book?

Yes, yes I can  . This is completely unedited and is from the fourth book in my Shifters of Freedom Springs series.

“Holy fuck!” He couldn’t help but roar at the view the falling dress revealed and had to stop himself from coming by squeezing the base of his dick. Hard. But it was a bloody close thing! Neve stood before him in a bra, no- a half bra that basically lifted her breasts up and forward, presenting them in all their naked glory for his pleasure. There were cups, but they lay beneath her beautiful breasts, and didn’t cover a damn thing. She wore stockings that stopped at mid-thigh and left an expanse of creamy white skin between the stockings and the barest, skimpiest G-string he had ever scene.

Behind the minute strip of black peek-a-boo lace, he could tell she was bare. His jaw dropped as she continued to dance for him. Her hands sliding over the skin of her tummy, up over her naked breasts and as her fingers slide over the turgid tips, her mouth opened on a gasp that was audible above the music. He was so lost in her he didn’t realize that the music had stopped, not until he registered that the only sound in the room was their harsh breathing.

He was standing staring at the hottest damn woman in the world, and he had no recollection of even getting to his feet. His mouth dried up completely and his tongue stuck to the roof his mouth when his very own wet dream walked toward him. When she reached him, she ran her hands down his pecs and abs, as she gently ground herself down to kneel in front of him. He expected her to roll her hips and rock back to stand in front of him, so he cried out when she surprised him by sucking his cock to the back of her throat.

Do you draw on any of your own life experiences

Yeah totally! All of my characters have personality traits from people in my life or that I have met. I am a little, kinda more than a little, okay, bordering on a shit load of sarcastic, and that comes out in my books as well. Hubby and I research sex scenes thoroughly, and he is really enjoying the opportunity to play more dominantly than we have in the past. I gotta tell ya, I’m enjoying it a lot too!! There is a scene in my upcoming release Xanthe’s Choice that involves a wing back chair… my hubby liked the potential of what he read in that scene so we just brought one of those!

If you had a free pass to date, sleep, or marry any celebrities who would it be?

Hmmm, that is totally hard I wouldn’t know- CHANNING TATUM! Absolutely one hundred percent Channing Tatum. I would date, sleep and marry the fuck out of that man…. Sigh….

What is your most fondest memory ever …. the naughty kind of course?

The night I got engaged! My hubby surprised me with flights to Auckland to see Norah Jones, put us up in a suite and proposed on bended knee on the revolving restaurant in front of a packed out place, over desert and champagne after the concert. Then we took the remains of our desert, a bottle of champagne and some fresh strawberries back to the hotel room and didn’t leave it for almost 36 hours. Sigh. I learnt I love to be tied down that night.

Have you ever written anything that you wouldn’t dare to do in real life?

Hmmm, I don’t think I would ever be daring enough to wear a pearl thong. Despite the fun you can have with them, they look really fucking uncomfortable!

Do you kiss and tell … or do you write and tell?

Both! My hubby is my best friend and confident and I will fire questions at him quite randomly when I am writing at night. Things like “Honey, if I was sucking you off, would you want me to…” or vice versa, if during Funday Sunday we try something that rocked my world, I have been known to mutter “that is so going into my next book” from whatever position I may be in.

Is google your friend while researching?

Yes, and I may have to dedicate a book to Google at some stage

How open are you at admitting that you are an Erotica Writer to people?

At the moment I have kept it pretty quiet – basically due to my fear of failure rather than anything else. My family and close friends know and they think it’s cool!

Top Or Bottom Both – when I’m allowed 😉

Being Tied up Or You Tying Them Up Being tied up

Dom Or Sub Dom for me please!

A Big thank you to Maia for letting me interview her, its such a pleasure to have her today.

Below are a few of my favourite books that i hope you will love as much as i do and of course buy them. 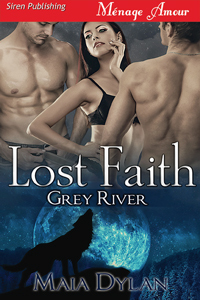 Is it better to have loved and lost than never loved at all? For Ty and Trent Jamieson, the Grey River pack Alphas, they would say either would be preferable to both!

They knew Faith was destined to be theirs from the moment they first came across her scent. Finding out that she was only 19 and studying put their grand mating plans to the back burner, at least for a couple of years. Problems only arose when she suddenly left them when they had finally decided to come clean about their feelings that they had kept hidden and claim her. They lost Faith and when Mother Nature steps in dramatically to give them an opportunity to get her back, things become very clear that perhaps her leaving was not all as it seemed. Can the brothers bring their fated triad together and protect their mate as it should have always been? Or are they destined to lose Faith forever?

What would you do if you featured in a prophecy that if left unsolved meant the end of the world? Casey Rika went camping!Despite being a powerful Elemental, she got shot twice, left for dead in the middle of the forest, and ended up in the arms of the wolf from her dreams. As the Earth Elemental chosen by a goddess, Casey had until the first day of summer to solve her part of the prophecy, and start the journey to save a goddess caught in the Otherworld, and defeat a God. How hard could that be? Micah Winters rescue mission into the national park where he worked as a ranger, became personal as soon as he realized it was his mate he was rescuing. Now, Micah really only had one goal – help his mate solve the prophecy and keep her alive

Fiona Aideen is a Fire Elemental who knows how to take care of herself just fine. It’s the two wolf shifters who claim she is their mate and the psychotic demon with a God complex hell bent on the destruction of earth she’s going to have some difficulty with.

Cole and Travis Winters are twins with a mission. Convince their mate that she is exactly what they want and need, and that they can be the same for her. They both know that getting Fiona to accept them both will be a challenge, but neither of them are willing to take no for an answer. Not when the prize was so damn perfect for them and everything they had ever hoped for in a mate.

Can the three come together to solve her portion of the prophecy and bring them one step closer to victory, or will Fiona’s past and her fears stop them before they’ve even begun?

Dont forget to comment and you will be entered in to a give away.